Our daughter has a vivid and wild imagination. She’s a fun loving and creative girl who loves to invent stories that are, if you ask her, not invented, but real.

Take the fact that she has another family. In China. She’s never been to China or even Asia, but if you ask Bella, she’ll say that she has a WHOLE family in China that includes brothers, sisters, grandparents and of course, parents. And in her eyes, China is perfect. Her mother in China allows her to eat whatever she wants, stays up later than in Rio and even, get this, not bathe.

The land that Bella invented

We encourage her to be creative and so we’ve taken her on a magical airplane ride (made of our kitchen chairs) to China. On her journey she has waved to aunts and uncles in Bolivia, laughed and pointed down to cousins playing in their backyard in California and eventually we flew into the airport in China.

She was the pilot of course and all her dolls and purses were the passengers and luggage. We’ve also shown her some youtube videos that show what the country of China looks like. But the best thing about China is the language.

So everyone is clear, Bella is 4 and she doesn’t yet grasp that the people of her imagination are not entirely real. In fact, to Bella, everyone  in china has pink and purple lips and they love wearing make up, so the fact that her new language sounds a lot like Brazilian Portuguese is okay with us.In her mind, they are real people who look and act like this family, but there are more family members to play with.

She naturally speaks Chinese, fluently. And sings in it too. Bella can sing in Chinese, Portuguese and English, we’re working on Spanish, but maybe we’re asking for too much. Did you know that you must bow when you say good night in Chinese? It’s a long exaggerated ” Guh Nighe” too. Sometimes the phrases and words sound like Portuguese and sometimes responses end in :”menta”.

Bella’s conversations often begin with, “Mama, in China…” and we never know how they’ll end

To Bella, China is a magical land that has flying cars and a place where boys and girls get to wear what they want. The hand soap tastes like fruit and little brothers turn into big brothers who can run and play with you. Sometimes I wouldn’t mind living in her China, but I think we would have to be invited to live with her family there, We’re still waiting on that invitation…

It’s really no wonder where she got her imagination, my mom told me all about my other family when I was younger, she says I had multiple imaginary friends who were constantly getting married, and running away. but other languages and details about appearance? This girl is good.

P.S I tried to get a video of her speaking Chinese, but it didn’t work out 😦

4 thoughts on “Our little linguist” 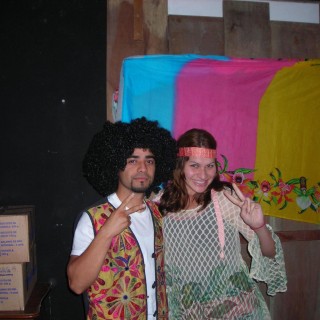